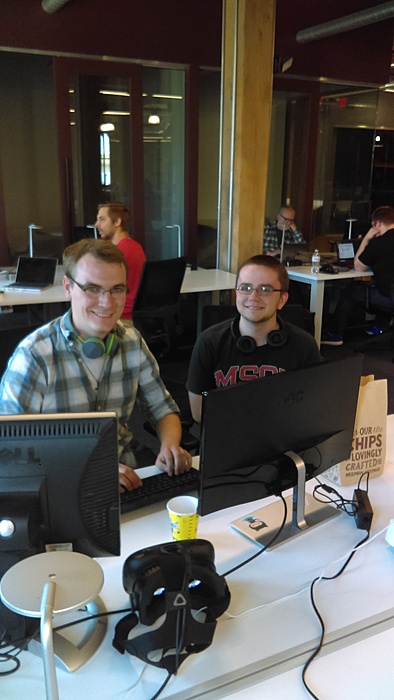 What is a Hack N Tell

For those of you who don’t know what a Hack N Tell is, it’s a 8 hour event in Ward 4 where a lot people sit in the same room and they just work on something during that time frame. Lunch is provided for Hack N Tells and at the end you have the opportunity to present what you worked on during the event for the chance to win prizes.

What Andy Worked On

During the Hack N Tell I worked on adding features to an application I’ve been working on all summer, a post editor for the SSE website, which I’m using currently to write this post. On the SSE website currently we have very few posts currently and I’m hoping the editor will help increase the number of posts on the website by allowing people to directly write and submit posts for the website instead of having website developers only writing posts. The main feature I worked on is allowing a user to edit existing posts on the website. Over the course of the Hack N Tell I worked on refactoring existing code in the backend and making a new list page which will allow a user to either edit an existing post or allow them to create a new post. At the end of the event I ended up with an initial list page shown below. 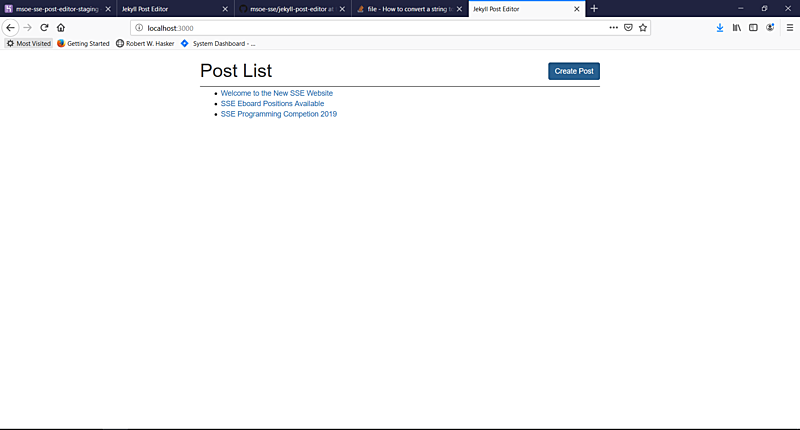 The page does look kind of basic at the moment, along with the initial edit view but I’m hoping to get some help from some of the other SSE website developers in order to make the post editor look better.

What Seth Worked On

What’s up y’all? It’s ya boi, the Game Dev Chairman! I hear you want to know what I did during the Hack’n’Tell? Well, I’ll tell you. But first, a backstory:

You sit down on a warm Saturday afternoon. You are sweaty from moving about 30 pounds of equipment from a parking lot a quarter mile away into Ward 4, and decide to boot up your Unity project to work on everyone’s favorite in-progress title Euclid’s Dreamland. However, you notice that things have gone horribly wrong. You never updated your code, but everything is broken. Why? Is it your bad code? Random constants? Stupid dependencies? No, it’s your game engine that’s the problem.

That’s when I decided to switch projects. I didn’t feel like debugging a broken -project- game engine ;p. So, after talking to Andy for a bit, I decided to familiarize myself with the Godot Engine. I felt guilty at first, like I was cheating on Unity with a newer, sleeker, open source project. I only hope Unity can forgive my infidelity; however, I have fallen in love with Godot, and I don’t think I can go back.

With Unity, minutes dragged on into hours; but with Godot, things were different. Godot made the time fly. I felt like I was making video games for the first time all over again. I was able to create a wonderful, beautiful asset. A breakable bundle of bricks.

These bricks are supposed to break when the player hits them from underneath, kind of like in Super Mario Brothers (Don’t Sue Me @Nintendo). While it took me a little while to get used to the different ways that Godot did things, I was able to speed through this creation relatively quickly.

Perhaps this new flashy engine is just a small spark which will fade away with time. Perhaps I will come crawling back to Unity. Perhaps not… Until then I will cherish the times I had at the Hack’n’Tell working with the Gadot Engine.

My final result with the brick asset is shown below. 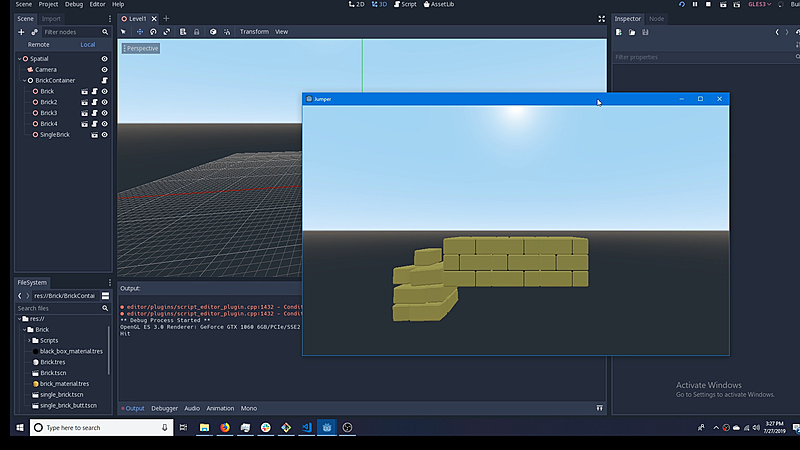